Open an HVAC control panel, and you’re likely to find at least one relay mounted inside. Sometimes you find lots of relays! Even though relay technology has been around since the 1800s, there is still a need for relays in control panels.

What components make up a relay? How are relays typically shown in wiring diagrams? What functions can a relay perform? Stay tuned for some answers…

What Components Make Up A Relay?

A relay is constructed from the following components:

How Does It Work?

You might have built an electromagnet in high school science class and used it to pick up small metal objects.  An electromagnet is a coil of wire wound around a metal core.  When the coil of wire is hooked to an electrical power source and current flows through the coil, a magnetic field is produced which surrounds the coil and the core: 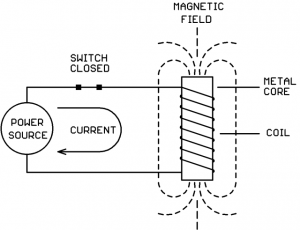 While the electromagnet is energized, any metal objects which come close will be physically pulled towards core. 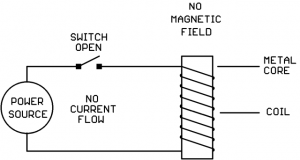 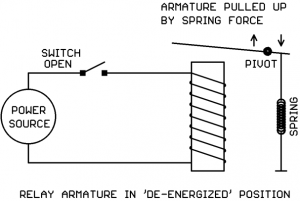 If we now energize the coil, the magnetic field will overcome the spring force and pull the armature down: 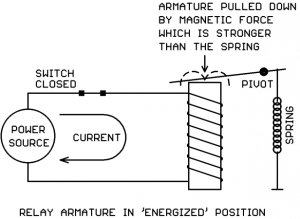 So… we have an armature which we can move up and down by de-energizing or energizing the electromagnet coil.  What do we do with it?

We use the moving armature to open and close electrical contacts which are separate from the coil circuit.  We can do it like this:

In this example, we’re using the metal armature itself as the “Common” or “Wiper” for a double-throw switch.  The tip of the armature makes contact with one of two possible points depending on the position of the armature.

When the relay is de-energized, the armature is up and the wiper makes connection with the “Normally Closed” (NC) contact.

When the relay is energized, the armature is down and the wiper makes connection with the “Normally Open” (NO) relay contact: 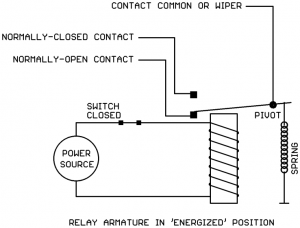 Relays can have more than one set of contacts (poles).  In the next example, the metal armature is not part of the electrical circuit but instead moves a plastic connector that activates two sets of contacts:

The number of poles (contact sets) can be expanded (3PDT relays, 4PDT relays etc.).  Typically 4 poles is the largest relay we would see in an HVAC control panel.  If you need more than 4 poles in a relay, you would probably use two relays with the coils wired together in parallel.  Shown below are a DPDT relay and a 4PDT relay wired together to create 6PDT relay action: 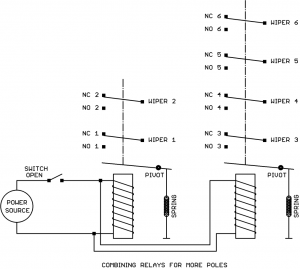 Electrical Ratings of a Relay

The coil of a “classic” relay (no electronics) is typically rated for a specific voltage and either AC or DC operation but not both.

There are some modern relays (like Functional Devices “Relay In A Box”) that contain electronic circuits that allow the coil to operate over a range of voltages and either AC or DC operation.

If in doubt, the relay’s datasheet should clearly spell out the acceptable voltage range for the coil and whether it’s AC only, DC only, or AC/DC compatible.

Relay coils are generally tolerant of some variation in the coil voltage, a typical datasheet specification is 80% – 120% of rated coil voltage.  So if a 24V transformer is “running a little hot” (putting out maybe 27V) or there is a bit of voltage drop in the coil connecting wires (maybe the coil is only getting 22V) the relay will still function just fine.

The relay coil may be drawn several different ways:

The relay contacts are typically shown one of two ways:

Relays go by several possible names on an electrical drawing:

If there are multiple relays, the name will be followed by a number or a letter as in RLY1, RLY2, RLY3 or RLYA, RLYB, RLYC.  There might be a hyphen (-) between the name and number or letter too.  There is no specific standard on how relays must be named.

Sometimes the relay is shown as a single assembly with coil and contacts arranged in a rectangle: 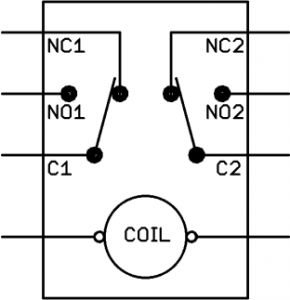 But sometimes the coil and the contacts are scattered around the drawing:

Unfortunately there does not seem to be a standard for the terminal numbering on relays.

Some electronic relays such as Functional Devices “Relay In A Box” have color-coded flying leads rather than screw terminals.  Consult the device datasheet to determine the function of each color-coded lead.

Functions a Relay Can Perform

So what useful functions can a relay perform?

The example below demonstrates a relay performing a combination of several of the above functions.  A low voltage, low current control signal from a controller is switching a high voltage, high current load on and off.  The relay is also allowing a DC control signal to switch an AC load.  There is also electrical isolation between the drive circuit and the load circuit so that the controller is protected from the high voltage 240V power source: 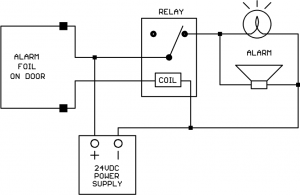 Let’s see how we can use both the N.O. and N.C. contacts to get “alternate action” between two loads.  We decide that in addition to the ALARM light, we also want a NORMAL light for our alarm circuit that is on when the foil connection is intact.  So we want the action of the NORMAL and ALARM lights to alternate, one or the other is on at any time, but never both at the same time.  We can get this alternate action by adding the NORMAL light to the N.O. relay contact: 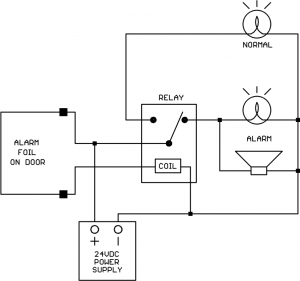 You may begin to see how versatile relays are.  Even with all the high-tech electronics in control panels, relays will be with us for a long time to come.  The operation is easy to understand and they can be used for many different applications. 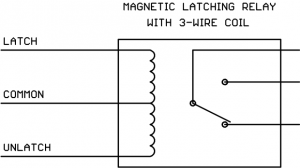 Other magnetic latching relays have just two coil wires, but the polarity of the applied DC drive determines whether the command is Latch or Unlatch:

The Latch and Unlatch drive signals are typically meant to only be momentary, you normally would not leave either signal on the coil continuously.

Some points to remember about relays: