The Tech Support crew here at Kele frequently gets quizzed by customers who have a voltage-output signal source which must drive multiple voltage-input loads. Requests for “voltage signal replicators” come in frequently. Sometimes extra hardware is needed, but sometimes it isn’t! So we thought it might be a good idea to write an article addressing this topic. Here we go…

Impedance is measured in units called “ohms.”  If you don’t know what ohms are, don’t worry.  All you have to do is poke the numbers into some simple calculations later on.  You may see a suffix “k” or “K” appended after the ohms value on a data sheet.  This is important to note!  The “k” or “K” means “times 1000” so an impedance of “100K” means 100,000 ohms and that’s the number you would put into your calculations.

On with the show…

The first thing we must do is answer a few questions about the signal source and loads:

The first two questions are sometimes difficult to answer, and are application-dependent.  If you cannot find concrete answers, you can always assume that every device must have isolated signals.  This approach will always work, but it will also cost more money as signal isolator hardware is required.

As an example, suppose the signal range of interest is 0-10V and the maximum output current available from the signal source is 2 mA (0.002 amps):

When connecting voltage loads in parallel, you’ll need to calculate the “equivalent load impedance” of all the loads connected together.  There are a couple of ways to do this:

If all load impedances are the same—

Equivalent load impedance = impedance of one load / number of loads

If the load impedances are different –

The second calculation is most easily done using the 1/X key on your calculator.  Just do a 1/X calculation for each load impedance and add the terms together.  Then do a final 1/X calculation on the first result.  Here’s an example—

The two rules that must be satisfied

There are basically two rules that must be satisfied when driving multiple loads from a voltage source:

Case 1:  It’s OK for all devices to have their Signal Commons tied together

This case can be done using direct wiring (NO extra hardware) if the equivalent load impedance (calculated above) is greater than the signal source’s minimum load impedance: 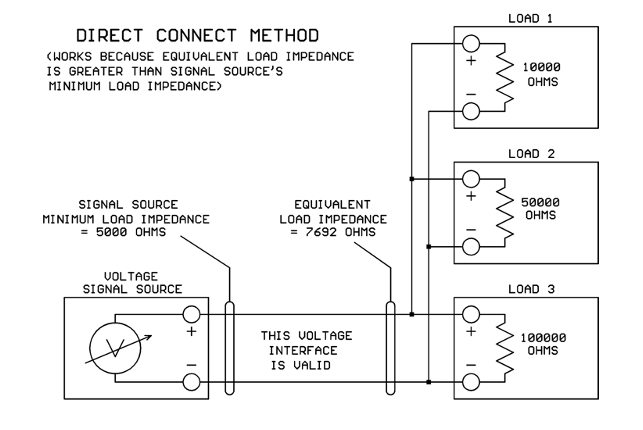 That’s great UNLESS… your equivalent load impedance is smaller than the voltage source’s minimum load impedance.  Then what are you going to do?

When the equivalent load impedance is too small for the signal source to drive directly, you will need to insert a “signal booster” device of some sort between the original signal source and the loads.  The signal booster doesn’t need to boost the voltage (you typically want the same voltage out that’s coming in).  It needs to boost the available current so there is enough to drive all the loads connected together.

The Kele UAT is a good device to use as a signal booster in this application.  A look at the data sheet shows that its voltage output can drive up to 20 mA of current.  Let’s assume that the signal range of interest is 0-10V so the maximum voltage we ever need to output is 10V.  Then the minimum load resistance supported by the UAT would be:

This is plenty of drive power for most parallel-connected voltage loads. 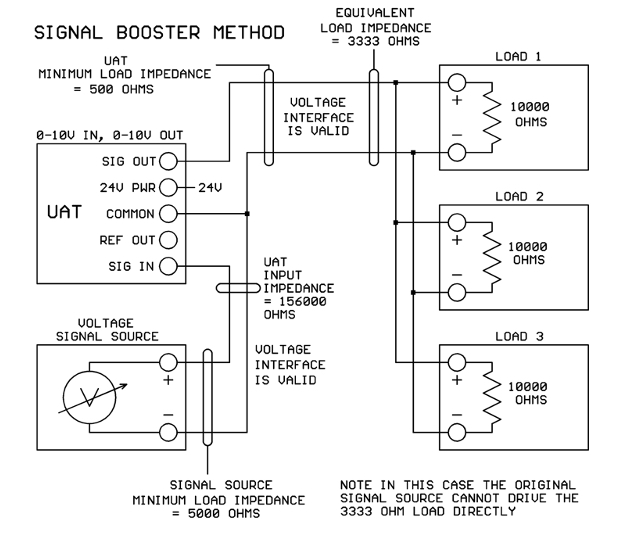 Now you should understand that the UAT does not provide signal isolation as it has one Common terminal for both signal input and output.  If you require isolation between devices, read on…

Case 2: Load Signal Commons can be tied together, but voltage source needs isolation

We look at the DT-13E data sheet and see that the input impedance on the 10V input range is 13.3K.  This is higher than the signal source’s minimum load impedance of 5K, so there is no problem driving the DT-13E input from the original signal source.

Looking at the DT-13E voltage output, we see that the maximum current available is 6 mA.  For a 0-10V signal, the max voltage we need to drive out is 10V so the DT-13E’s minimum load impedance will be:

If we have the same three 10K loads paralleled as in the previous example (3333 ohms equivalent load) then the DT-13E has enough drive and this setup should work just fine: 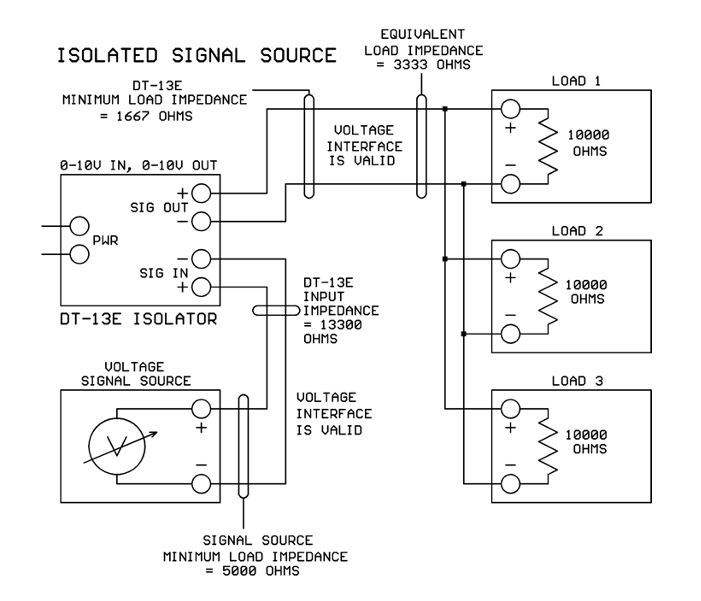 Case 3: Load Signal Commons must be isolated from each other

In this situation, each load will need its own signal isolator module like the DT-13E.  The most obvious setup to use is shown in the next figure.  When we do the load calculations, however, we find that three DT-13E inputs in parallel will present an equivalent load impedance of 13.3K / 3 = 4433 ohms.  Oops, that is lower than the minimum load impedance of 5000 ohms specified for the signal source: 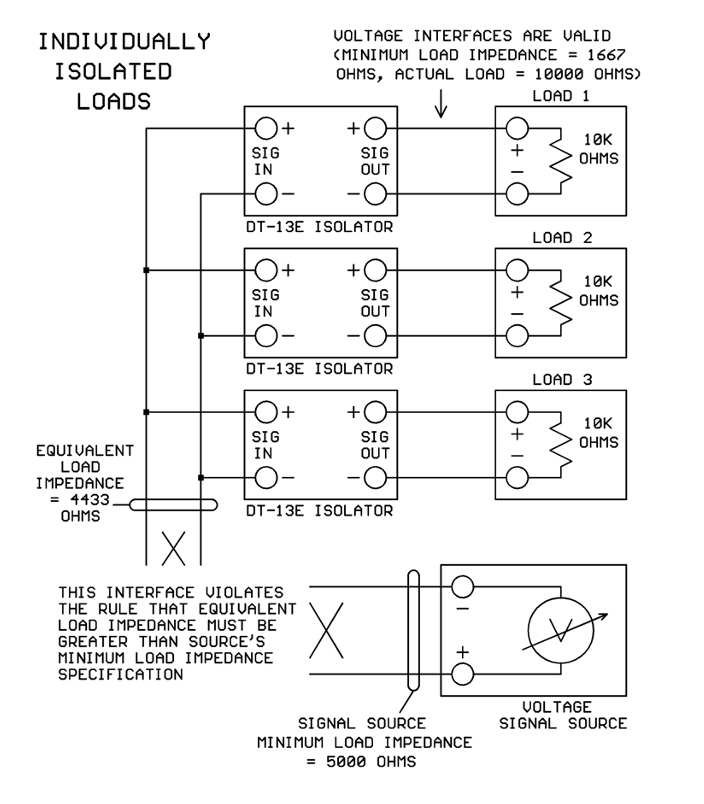 How do we fix this problem?  Here are some possibilities:

Let’s see what we can do with option #3.  Realizing that inputs and outputs are isolated on the DT-13E modules, it’s perfectly legal to take one of the DT-13E inputs and drive it from another DT-13E’s output.  Let’s check the math to see if this would work.

With only two DT-13E inputs paralleled on the signal source, the equivalent output impedance would be 13.3K / 2 = 6650 ohms.  This is higher than the signal source’s minimum load requirement of 5000 ohms, so that works.

With the new arrangement, one DT-13E output will drive a parallel combination of the original 10K load and one DT-13E input (13.3K).  The equivalent load impedance will be:

This is higher than the DT-13E output’s minimum load impedance of 1667 ohms so that works too!  And this is the final configuration:

By following the two interface rules discussed above, multiple voltage-input loads may be successfully driven by a common voltage-output signal source.  The math is simple algebra and can be done on any calculator.  Happy interfacing!