In the last edition of 20/20 Insights we discussed the elements that must be present in order to produce an explosion. The three legs of the “fire triangle” (fuel, oxygen, and an ignition source) are required to support combustion. In addition, the volume ratio of fuel to air must be within the fuel’s explosive limits, and the ignition source must release sufficient energy to ignite the mixture. Removing any of these three elements will eliminate the explosion hazard.

Perhaps the most common and familiar way to eliminate ignition sources from a hazardous location is through the use of explosion proof construction. An enclosure that is rated explosion proof (NEMA 7, 8, 9, or 10) for a particular hazard group (explained below) is strong enough to withstand the pressure of a worst-case explosion inside itself. Additionally, it is designed to vent the resulting hot gases in such a way that they are cooled below the ignition temperature of a worst-case explosive mixture outside the box.

To contain the pressures of an explosion, these enclosures are made from heavy cast steel or cast aluminum. To cool escaping gases, flanged enclosures have extra-wide flanges that are ground to a smooth finish and tight tolerance – thus yielding a very thin, very long path to the outside as shown in the illustration. Enclosures with threaded covers (and threaded connections to either type of enclosure) produce the same effect by virtue of the long, narrow path through the threads. As the hot gases from an internal explosion pass through these long, narrow channels, they give up heat to the metal and their pressure is reduced. These two effects team up to lower the temperature of the gases to a safe level before they can come in contact with the atmosphere surrounding the enclosure.

With flanged enclosures, it is very important to torque the cover bolts evenly and as close as possible to the recommended value. Also, the flange surfaces must not be scratched or marred in any way. Improper torque or damaged surfaces can allow hot gases to escape and ignite an explosive mixture outside the enclosure. Threaded connections or covers must engage at least five full threads to maintain the integrity of the system.

One additional step is needed to control the spread of hot gases – conduits entering the enclosure must be sealed within the code-required distance (usually 18”) of the box to prevent the buildup of pressure within the raceway system or the leakage of combustion products into the room. If a jacketed cable passes through a conduit seal, the jacket should be removed within the seal so that the sealing compound can completely surround each insulated conductor. An alternative is to seal the cable at the end of the jacket as shown in the illustration.

So where can these types of enclosures be used? As usual in our industry, there are no easy answers! Each explosion proof enclosure will be listed or labeled for use in a particular environment as defined in the National Electrical Code (NEC) or IEC Standards. In turn, the hazardous area itself must be classified according to the same standards. The enclosure must have a listing that meets or exceeds the classification of the area in which it is to be used. In the NEC, considerations are Class, Division, and Group as shown in the table below. IEC standards use different code letters from the NEC but generally follow the same logic. 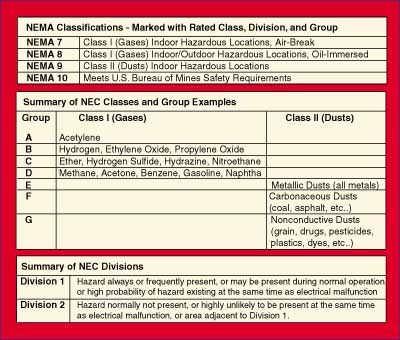 For gases (the majority of our industry’s hazards), explosion proof enclosures are readily available for Class I, Division 1, Groups C and D. Enclosures rated for Group B (hydrogen) can also be found, but generally only in small sizes since it is so easily ignitable and has high explosive energy. Almost nothing is offered for Group A (acetylene) environments because of its easy ignition and tremendous explosive energy.

Using explosion proof enclosures removes the ignition leg from the “fire triangle” in a potentially hazardous location. Although it is costly and requires care to maintain the system’s integrity, it is an effective method for working with electricity in combustible atmospheres. In a future 20/20 Insights we will discuss intrinsically safe systems, another way to remove potential sources of ignition from hazardous locations.