Automation dealers are continuing to gain business that was once reserved only for specialty and industrial contractors. It’s a trend that is accelerating very rapidly, and the fastest growth is in the areas of hazardous locations and the monitoring of toxic and combustible gases. Kele is committed to providing the products and technical support needed to assist our customers in these important areas. By way of introduction, this article covers the basics of a hazardous atmosphere and the equipment we use to monitor combustible gases. Future editions of 20/20 Insights will contain information relating to principles and application of intrinsically safe systems, explosion proof systems, and other available means of dealing with electrical equipment in hazardous atmospheres.

The widely known “Fire Triangle” illustration shows the three components required to support combustion. All three must be present, and the methods we use to prevent explosions are designed to eliminate one of the three legs of the triangle. What the triangle doesn’t show, though, is that fuel and oxygen must be mixed in the proper proportion in order to burn. If the fuel is methane (CH4, the major component of natural gas), the concentration in air must be between 5 percent and 15 percent or else the mixture will not ignite. Those of us old enough to have worked with finicky carburetors on gasoline engines are familiar with this principle. If the mixture was too lean (not enough fuel) or too rich (too much fuel), the engine would not start. The same applies to ignition of any combustible gas in air. 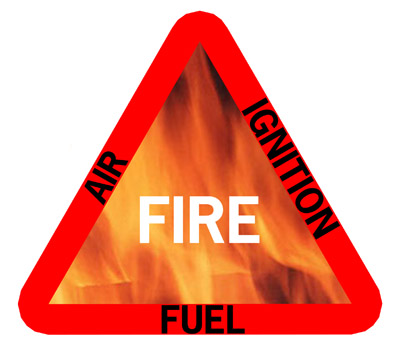 The lowest concentration of a gas in air that will ignite is its lower explosive limit (LEL), and the highest concentration that will ignite is its upper explosive limit (UEL). These values are also sometimes referred to as the lower and upper flammability limits (LFL, UFL). Limits for some common fuels are shown in the table of flammability limits at right. If a system is designed to keep the fuel concentration below the LEL, the fuel leg is effectively removed from the fire triangle. Under certain conditions (in an oil field, for example), it is easier to maintain the concentration above the UEL. In this case, the oxygen leg is eliminated. In either case, combustion cannot happen.

Note: Multiply percentages by 10,000 to convert to parts per million (ppm).

It is often advisable to monitor the concentration of fuel in air, in order to take action or sound an alarm if it is moving toward an explosive level. Kele has gas monitors that are ideal for this purpose. Some sensors provide a 4-20 mA signal over the range of 0 to 100 percent of the LEL, with an alarm relay set to energize at 25 percent of the LEL (an industry standard alarm point). For example, if the gas is methane, (5 percent LEL), the sensor will output 4 milliamps at 0 percent methane and 20 milliamps at 5 percent methane. The alarm relay will energize at 1.25 percent methane. With these devices, the alarm relay or an automation system responding to the analog signal can cause electricity (source of ignition) to be shut off in an area if the gas concentration is rising toward the explosive level (LEL). If the sensor itself must remain energized, an explosion proof enclosure is available to prevent it from becoming the source of ignition itself.

The system described here is based on removing the fuel leg from the fire triangle, then having an automatic means of removing the ignition source leg if the fuel begins to return. This is the first of many ways we will discuss to work safely with electricity in hazardous locations.