Some HVAC applications require reading and totalizing pulses from flow meters.  This sounds simple enough, just take the pulse output from the flow meter, connect it to a Binary Input (BI) on your controller, and set up the program logic to count pulses coming in on the BI.  What could go wrong?

Unfortunately things are not always as simple as they appear.  HVAC controllers frequently operate on the “scan” principle where the inputs are not read continuously, but only once per controller scan.  Controller scan time could be fast or slow depending on the controller design.

The controller only “sees” a pulse if the input is low on one scan and high on the next scan.  This means that:

What can I do if my flow meter pulses are too narrow to be reliably detected by my controller?

Kele sells a Universal Pulse Divider (UPD-2) that can divide the incoming meter pulses by a selectable divisor and output a wider pulse that your controller can reliably detect.

What kind of pulse signals can the UPD-2 accept on its input?

The UPD can accept pulses from a simple contact closure, a transistor switch, or a driven 0-5VDC signal:

In the Low state, the output of the flow meter must be able to sink approximately 2.3 mA of current.  This will be compatible with most flow meters.

What kind of output does the UPD provide?

The UPD output is an optically-isolated electronic switch.  It is polarity sensitive.  In the High state it is open-circuit, in the Low state it closes the circuit.  In the Low state, the output can sink up to 6 mA of current.  In the High state, it can tolerate up to 30VDC.  The UPD output is compatible with most controller Binary Inputs which are typically configured as an internal reference voltage with a pull-up resistor as shown below:

What is the minimum high or low pulse time the UPD will detect on its input?

The UPD will reliably detect any pulse with a high or low time of at least 10 milliseconds.  This limit is programmed into the UPD’s microcomputer firmware, the hardware could actually detect shorter pulse durations.  But HVAC equipment lives in electrically noisy environments, and we don’t want to start counting noise glitches as flow meter pulses, so we set the minimum valid pulse duration at 10 milliseconds.

How do I set the Divisor value on the UPD?

The UPD has an 8-slider DIP switch for setting the divisor.  Each slider has a divisor value assigned thus:

** After changing the DIP switch sliders, be sure to cycle the UPD power as the DIP switches are only read by the microcomputer chip at power-up.

How does the division logic work on the UPD?

This is one of those times where a picture is worth a thousand words.  Shown below is the division action when the total divisor is set to 3 (sliders 1 and 2 On, all others Off): 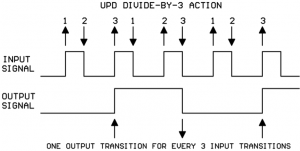 How do I know what the duration of the output pulse will be? 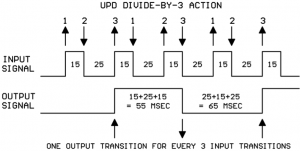 For example, say the nominal pulse with is 20 msec and the frequency at max flow rate is 20 Hz.

So the overall approach to using the UPD is this:

How about an example?

What happens if you set the Divisor = 1?

You simply get a replica of the original input signal.  But remember, the output is electrically isolated from the input so you could use the UPD as a simple pulse signal 1-for-1 isolator.

What else should I know about the UPD-2?

The UPD-2 has an on-board 24VAC isolation transformer for its power supplies so you can get your 24VAC from any convenient source without worries about ground interactions. 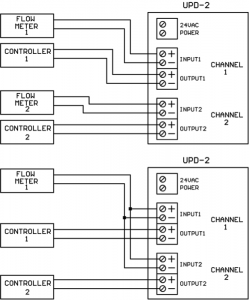 Flow meter output pulses are sometimes too narrow to be reliably detected on a controller’s binary input if the controller scan time is slow.  Inserting a UPD-2 Universal Pulse Divider between the flow meter and controller creates wider pulses that the controller can reliably count.  There is a well-defined method for deciding the correct divisor to use on the UPD-2.